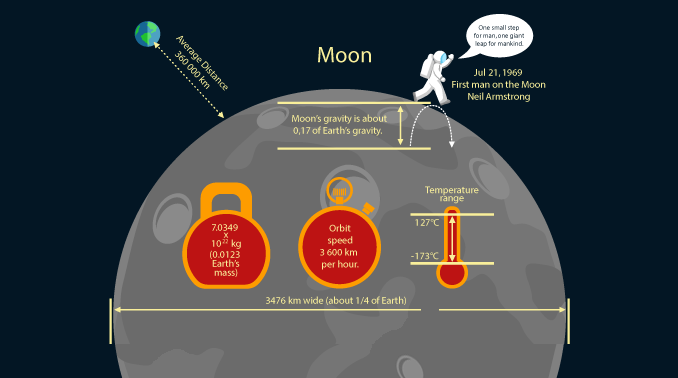 For example, that means 100 kg in weight would be 16.5 kg on the moon. Talk about a weight loss plan!

If you want to calculate how much you weigh on the moon, take your weight and divide it by 6.

Despite popular belief that the moon can’t hold onto an atmosphere, it actually consists of sodium and potassium.

Yet these gases cannot be found in Earth’s atmosphere, Venus or Mars.

It’s because the moon’s gravity pulls in these gases which gives it an atmosphere.

That means that a lack of atmosphere means the moon’s surface gets very hot (117°C) when facing the sun.

The Moon’s gravitational pull on Earth keeps it steady

The giant impact hypothesis sums up the formation of the moon. It had a tremendous impact on stabilizing Earth’s climate.

For example, the gravitational pull from the moon on Earth helps prevent it from wobbling. In turn, this prevents climate swings and wild temperature shifts.

Finally, the giant impact collision tilted Earth on its axis. Ultimately, this tilt is the primary cause of seasons on our planet.