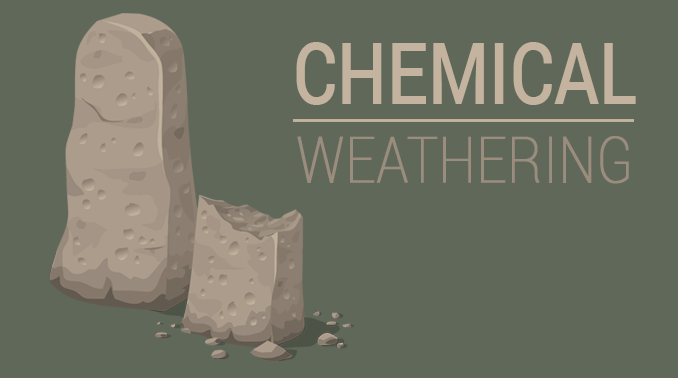 Unlike mechanical weathering, it either dissolves the minerals or converts them into other minerals. 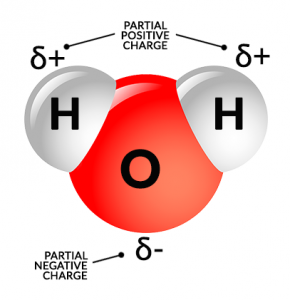 Carbon dioxide in the air can react with water to form carbonic acid. When it precipitates, this weak acid enters the cracks in rocks chemically reacting with it.

Over time, this reaction causes rocks to dissolve because of the polarity of water. This means that one side of a water molecule is positive and the other side is negative.

Water molecules can bind to either the negative or positive ions in the minerals. Over time, this reaction can pull the atoms apart.

Overall, dissolution is the process of rocks dissolving when acidic waters react with minerals.

This chemical breakdown of a compound is due to water and possibly other substances in the atmosphere.

For example, atmospheric CO2 which is air pollution can contribute to the dissociation of water and release of H+. 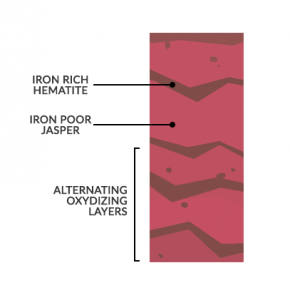 Occurs when free ions of oxygen join with iron (or magnesium) rich minerals to create new minerals like hematite and limonite.

For example, when you leave your bike in the rain, it gets oxidized (or rusted). Free oxygen within rainwater combines with iron to create new minerals.

The red color from rust is because of the presence of iron. This is commonly found in banded iron formations over 3 billion years ago, when photosynthetic organisms were just emerging.

How does chemical weathering occur?

Moist regions experience more chemical weathering because water is the basis of hydrolysis, oxidation, and dissolution.

Both temperature and its rate of change are critical in weathering. Chemical reactions tend to occur more rapidly in higher temperatures and can dissolve rock at a faster rate.

Finally, biology also plays an important role in chemical weathering. For example, the symbiotic relationship of lichen (which is just fungi and algae), releasing chemicals.

Over time, this chemical reaction can crack and weather away at rocks.