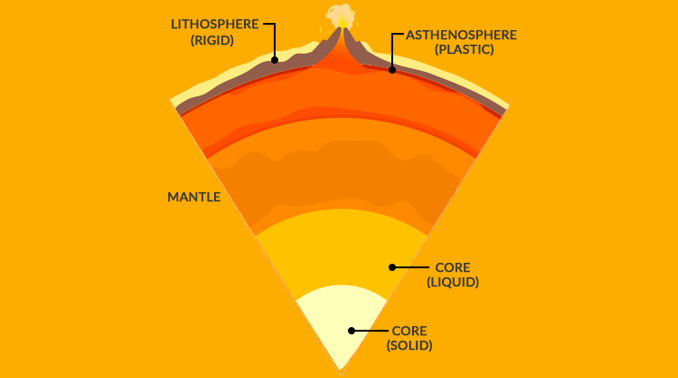 The asthenosphere is a soft and fluid layer responsible for driving plate tectonics motion.

Earth’s crust (lithosphere) is like a hard, rigid shell and sits on top of the asthenosphere.

Then, it rides it like a conveyor belt transporting it slowly from one place to another.

Now that you have the basics. Here are 5 facts about the asthenosphere.

The asthenosphere is the unsung hero of our planet. This plasticky layer 80 to 200 km beneath our feet provides the necessary lubrication for plate tectonics.

That’s right. It’s the rigid lithosphere that we live in which rides on the asthenosphere. It’s because of the fluid-like properties that our crust to sit on top.

The asthenosphere formed during a dramatic period of Earth heating. When the Earth started cooling down, solid continents began to rise up out of the mantle from plate tectonics.

Since then, rocks have cycled from deep inside the Earth and up again as part of the rock cycle. Like a conveyor belt, continents have passively carried vast distances as part of continental drift.

2. The asthenosphere is unique to Earth

The asthenosphere is unique to our planet. Earth is the only planet in the solar system with an asthenosphere.

For example, planet Venus has no sign of plate tectonics. Because Venus doesn’t have water, that means it doesn’t have an asthenosphere.

3. Convection cells occur in the asthenosphere 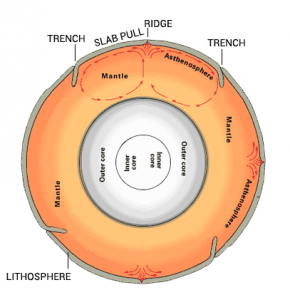 It’s important to understand that the asthenosphere flows. Because particles can freely flow, convection cells can happen here.

But in our rigid lithosphere (crust), it’s solid and particles cannot freely move. So, the lithosphere just floats on top of the asthenosphere.

Rock in the asthenosphere is close to melting point. The temperature sits at around 1500°C, give or take 100°C.

But it avoids melting because the pressure keeps it solid. For any type of rock, the melting point corresponds directly to the pressure exerted on it.

Because of its buoyancy, the lighter lithosphere rock floats on top of it. 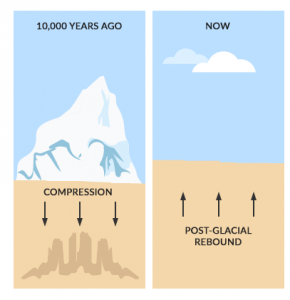 Ice ages have put our planet into a deep-freeze. These bone-chilling temperatures have stacked kilometers of glacier ice.

Because of the mass, the interior gets pushed in. It compresses the asthenosphere until it pushes it out-of-the-way.

If you were to remove the ice, you’d find the actual surface to be below sea level. For example, Canada is still on the rise from the last ice age. We know this because we use GPS sensors to detect vertical motion.

It’s rising because the asthenosphere rock is lifting again and flowing beneath. It’s flowing back up underneath slowly because ice is no longer compressing it.

So again, rock in the asthenosphere is behaving in a fluid manner. By deforming like silly putty, glaciers gradually push down it. After the ice melts, it slowly rebounds. This process is isostatic rebound.

Sandwiched between the North American & African Plates, the Eurasian Plate consists of parts of Europe, Russia, Asia as well as the Atlantic & Arctic Ocean.

The African major plate contains all of Africa as well as the surrounding oceanic crust of the Atlantic Ocean. It moves at an average rate of 2.5 cm per year.

Hydrocarbons, oil and coal formation in general are made from living organisms that have been compacted from intense heat and pressure millions of years ago.

Like a rake scraping the dirt, glaciers leave a lasting impression on the land. They can erode mountains, transport vast amount of rock and reshape the land.

The North American plate extends all the way over the North pole to Siberia. It also includes Greenland, Cuba, the Bahamas and part of the Atlantic Ocean.

“Lahar” is an Indonesian word for mudflow at volcanoes. Lahar flows down volcanoes as a mix of mostly water, mud and rock debris (similar to wet concrete).