Skip to content
Home » Outer Space » Properties of Earth » Shape of the Earth: The Oblate Spheroid 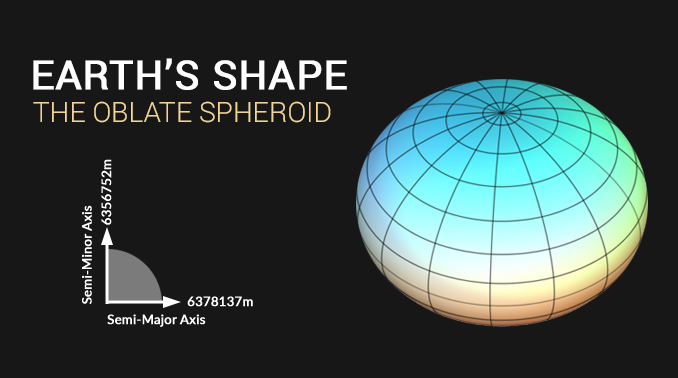 What is the shape of the Earth?

Earth is not a perfect sphere. It’s shape is an oblate spheroid. This just means that it flattens at the poles and widens out at the equator.

Earth bulges at the equator because of the centrifugal force during rotation.

Like spinning a pizza, the mass pushes outwards and flattens out along the axis of rotation.

Earth radius as a datum

Geographers model Earth shape as an ellipsoid, which is a sphere slightly flattened at the poles. They use a datum to reference geographic coordinates on Earth.

A datum describes the shape of the Earth in mathematical terms. It defines the radius, inverse flattening, semi-major axis and semi-minor axis for an ellipsoid.

So, this aligns well with the radius of Earth at the equator as 6,378 km. Finally, the squashing at the poles is slightly less at about 6,357 km.

Why Mount Chimborazo is higher than Mount Everest 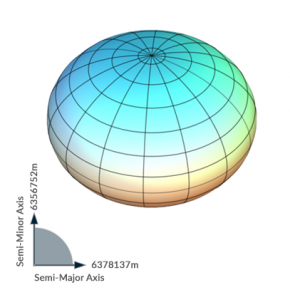 If you stand at mean sea level at the equator, you would be 21.4 km farther away from the center of Earth compared to standing at the north and south pole.

This is because the equator bulges and forms an oblate spheroid. So if you measure from the center point of Earth outwards, Mount Chimborazo is the highest point on Earth because of the equator bulge height advantage.

But if you compared height above mean sea level, then Mount Everest is the tallest mountain. While Mount Chimborazo has a peak elevation of 6,263 m, Mount Everest towers at 8,848 m tall.

Introducing: Our list of properties for Earth. It has everything including its spheres, tilt, age, shape, rotation and more.