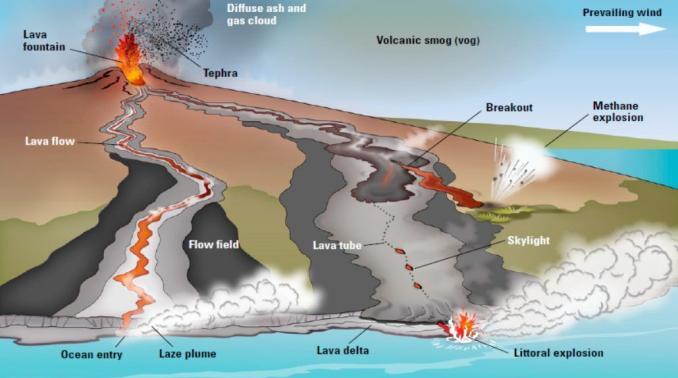 The 3 types of volcanoes are:

Let’s dive into the differences between these types of volcanoes: 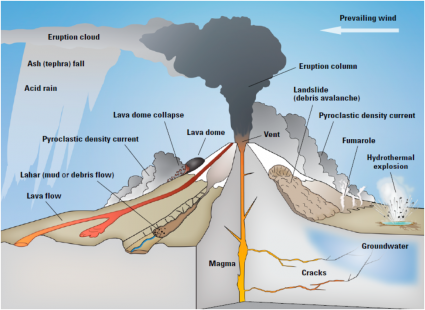 Stratovolcanoes are tall and cone-shaped. Instead of flat shield volcanoes like in Hawaii, they have bigger peaks. They build up by layering lava, ash and tephra.

When ash falls or lava flows, it solidifies and makes a narrower cone. At the peak, stratovolcanoes usually have a small crater. But if you blow the whole thing away, you get a large caldera.

Most stratovolcanoes are at subduction zones. If you travel along the Pacific Ring of Fire, these are mostly this type of volcano. The Pacific Ocean seafloor is subducting under the continents. It brings water causing eruptions from stratovolcanoes. Stratovolcanoes run through cycles with lots of small eruptions.

Examples of stratovolcanoes include: 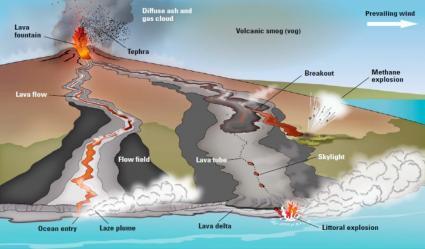 Shield volcanoes earned their name because they’re shaped like a shield. Hawaiian volcanoes are quintessential shield volcanoes. If you go to Hawaii, they are broad and flat. These volcanoes can be hundreds of kilometers wide.

Shield volcanoes tend to erupt fluid basalt lava. Violent explosions are possible. But they’re not as common for shield volcanoes.

Because basalt has a low viscosity (more watery) they can flow on the surface better. When these types of volcanoes erupt, lava flows out large distances.

Examples of shield volcanoes include: 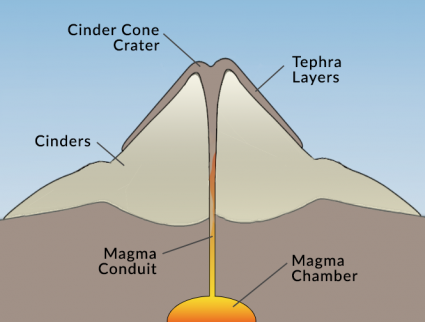 Cinder cones (scoria cones) are small in comparison to the other types of volcanoes. In fact, they’re only tens of hundreds of meters in size. But at the same time, they’re very steep typically with a bowl-shaped crater at the summit.

Cinder cones form out of tephra, magma and ash that it ejects. When cinder cones spew out lava, it splits it up in the air and splatters. Eventually, it cools down and becomes part of its steep cone-like feature.

Examples of cinder cones include:

Overview of the types of volcanoes

Based on their geography, volcanoes take different appearances.

We classify them as:

Would you like to know anything more about the types of volcanoes? Please let us know with a comment below.

In terms of space exploration, Mars has been the greatest frontier for discovery. From its red color to marsquakes, here are 15 remarkable facts about Mars. […]

Despite the popular belief that groundwater exists as a huge lake underground, water actually exists in tiny pore spaces within rock and soil beneath our feet. […]

How Do Glaciers Form?

Like a rake scraping the dirt, glaciers leave a lasting impression on the land. They can erode mountains, transport vast amount of rock and reshape the land. […]

The name “shield volcano” originated from its Roman shield-like shape. They are broad, flat and can stretch hundreds of miles wide like Mauna Loa in Hawaii. […]

Today, we explore 13 parts of a volcano. From tephra, fumaroles, magma, lava domes, pyroclastic flow to volcanic bombs, this is the anatomy of volcanoes. […]